Warts are small and usually grainy skin growths that often feel rough to the touch and can range in colour and appearance according to the location on the skin. Most often, warts appear on your feet, hands and fingers, although they can grow on other parts of the body as well.

Verrucas, or plantar warts, are warts that grow exclusively on the soles of your feet.

Warts first appear as an extra layer of hard skin, resulting in a raised growth that looks like a tiny cauliflower and usually has a rough surface. The colour of warts can range from white to brown-grey. 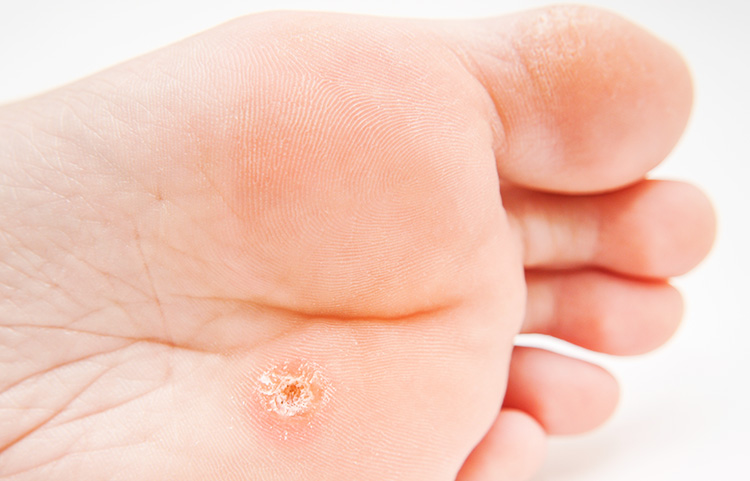 There are four types of warts:

Warts are caused by the human papillomavirus (HPV), which infects the cells in the outer layer of the skin through dry and cracked skin, or a cut or scratch. There are over 100 different types of HPV viruses, and they are contagious with a long incubation period (anywhere between two and six months) which can make it difficult to identify where you came into contact with a wart virus.

Once you have become infected, the wart virus initially lies dormant and the infection only becomes apparent after the wart starts to grow.

Warts can also spread from one place on your body to another. Fingertips are especially vulnerable and the area around the nail may become infected from activates such as nail biting.

There are two main ways of contacting warts:

Preventing the spread of warts can be difficult since the viruses that cause warts are everywhere – an estimated 10 percent of the population is infected.2 If you have warts, you can avoid infecting other people by treating your warts

How to avoid warts and verrucas

Avoiding and preventing the spread of warts and verrucas can be difficult. Find out more about wart and verruca prevention.

How to remove warts and verrucas

There are a number of different methods for removing warts and verrucas. Find out more about wart and verruca treatments.

Want to know more about warts and verrucas? Read our frequently asked questions. 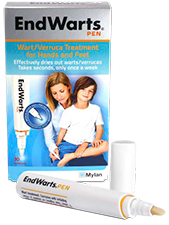 EndWarts® PEN is an effective wart treatment that takes only seconds to apply. The solution can be used by the whole family to remove warts and verrucas on hands and feet. 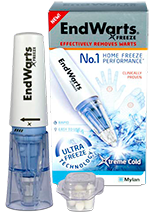 EndWarts® FREEZE is our latest alternative to EndWarts® PEN that uses rapid freeze technology (otherwise known as cryotherapy) to effectively remove warts and verrucas from hands and feet.

It is estimated that one in three children in the age range 4-12 have warts or verrucas, especially those that attend nurseries and schools.1 Although harmless, they can be unsightly and sometimes uncomfortable, causing embarrassment in social situations for older children and adolescents.

Children are more prone to becoming infected with HPV because their immune systems are not fully developed, and they also tend to have more cuts and scrapes than adults. Consequently, countries, where nurseries are more common, have a higher rate of warts in children.

If you see signs of warts on children, they should be treated immediately, as it can take two years or more for warts to disappear on their own and the infection could spread to others in the meantime

By clicking “Continue” below, you are leaving this Mylan affiliate site to arrive on a third-party site that is solely responsible for its content.

This site is designed for UK patients who have been recommended EndWarts®. If you are a healthcare professional, please click here to visit our HCP website.

EndWarts® products are medical devices. Always read the instructions for use carefully before application.

If you get any side effects, talk to your doctor, pharmacist or nurse. This includes any possible side effects not listed in the package leaflet. Reporting forms and information can be found at www.mhra.gov.uk/yellowcard or search for MHRA Yellow Card in the Google Play or Apple App Store. By reporting side effects you can help provide more information on the safety of this medicine. Adverse events should also be reported to Mylan by phone: 0800 121 8627 or by emails:ukpharmacovigilance@mylan.com